Rhys informs me that my last few posts about my ponies have been too niche. My mother made a similar remark. The trouble is that I am horsey, and it’s almost show season. Afterall, it is my blog, so it seems inevitable that horsey chat crops up, and would seem fake for it not to.

So for anyone completely baffled by equestrian jargon, here are 14 phrases to start you on your way to equestrian enlightenment.

One common mistake that crops up regularly is thinking that a pony is a baby horse. It’s not. It’s a small horse. A baby horse is a foal.

This means that the equestrian enthusiast is off to remove the poo from their steed’s stable. It’s not an announcement that they’re feeling especially chipper about leaving and are thus going to do so at a skip.

Again, an odd one. According to the dictionary, to hack is to “cut with rough or heavy blows” or to “gain unauthorized access to data in a system or computer”. However, in horsey terms, hacking means to eschew the arena and go out and about for a ride.

What? It works diligently? It shows an immense amount of talent at the workplace? No. This time, it means that the horse has the potential to to be a top class contender in working hunter classes, a competition whereby the horse must tackle a course of rustic fences, but also display impeccable discipline and good looks.

Really? Because to a normal person then it looks very much like this horse hasn’t been brutally dismembered and his legs are very much beneath him. What the horsey mean here is that the horse is stocky and sturdy in shape.

This doesn’t mean that your bridle has particularly long reins. Instead, it basically means that the horse has a long neck and a large shoulder, meaning that the reins need to be pretty long to reach from the rider to the bit(the thing that goes through the horse’s mouth). Horsey folk like this. Not only does it make the horse appear far more elegant, but it’s also harder to fall off if you’ve got plenty to hang onto.

What non-horsey friend thinks here is, “really? Are you looking at the same horse? Because it’s limbs look filthy to me”. This is another metaphorical one. It means that the horse’s limbs are free of lumps, bumps, blemishes and scars. And no, they don’t have to shave their legs. The hairiness doesn’t count here.

If a horsey person tells you this, don’t worry. They are not deranged and the horse wasn’t born in 1932 first time round. Instead it means that the horse sees dead people. Not really, but they think they do. And if not dead people, ghastly beasts lying ready in waiting to pounce upon them. Again, not really, they just think they do. A spooky horse isn’t itself spooky, but is rather easily spooked by pretty much anything, mainly its own overactive imagination.

No, neither horse nor rider have a severe bout of wind. This just means that the horse has his metaphorical foot on the gas. In other words, he’s feeling a bit speedy and exuberant.

I just tried this one out on Rhys. He said it made him think of ‘laying the table, or doing the dishes’. In fairness, this one is a bit of an odd one, but I’ll try my best to explain. Ideally, if you watch a horse walking from in front of it, it’s legs shouldn’t look like they are flailing wildly to the side with each stride, Charlie Chaplin-esque, as if it’s frantically waving. The waving motion is referred to as dishing in horsey circles. Nothing culinary about it.

No mistake here, I assure you. The last word in the above phrase is quite deliberately ‘on’, not ‘out’. With your legs largely controlling the beast between them, this phrase is used if you need to squeeze your legs a little harder around your steed, thus effectively asking it to go faster, or make a more powerful and expressive stride. No one expects a flash of leg. Which is just as well if,like mine, your legs are shaped like sausages and go purple in the cold.

Horsey women are a little deranged. Evidence of this is clear: their hobby involves sitting on a beast weighing half a ton with precious little linguistic skill, often hurtling into solid fences. When asked about other sports such as rugby, they may well issue forth a reply that involves the phrases “can’t watch”, ‘it’s really dangerous” and “if you play rugby then you may as well accept you will be injured” with no hint of irony and little self-awareness. BUT, I personally don’t know any that have actually gagged a man (or woman) in their lives. If you’ve recently started dating a horsey woman and you hear this phrase, don’t panic: a gag is simply a type of bit that you can use in the horse’s mouth.

Another funny one. I imagine in the minds of the uninitiated, this contours visions of the horse plunging wildly or doing some elaborate stretches. Neither would be correct. Instead, to lunge a horse is to attach a long rope to it’s head – for example to a bridle or a head-collar – then ask it to run around you in circles at the end of said long rope, or more specifically, the lunge rope.

“He looks a nice, comfortable ride.”

“Thanks. He’s good but a bit of a puller at times.”

Now you might be forgiven for thinking this conversation revolves around an entirely different sort of male to the speaker’s beloved steed, and one who’s earned himself a reputation as something of a lothario. But it’s not that type of blog. Instead, what the speaker means is that their horse is strong, literally grabs the bit between his teeth and thunders onwards with little regard for his rider. The rider, who will probably be exercising their strength on the rein in a feeble attempt to slow the horse down, will feel the horse is pulling at their arms, hence ‘he’s a puller’. As I said, it’s not that type of blog. 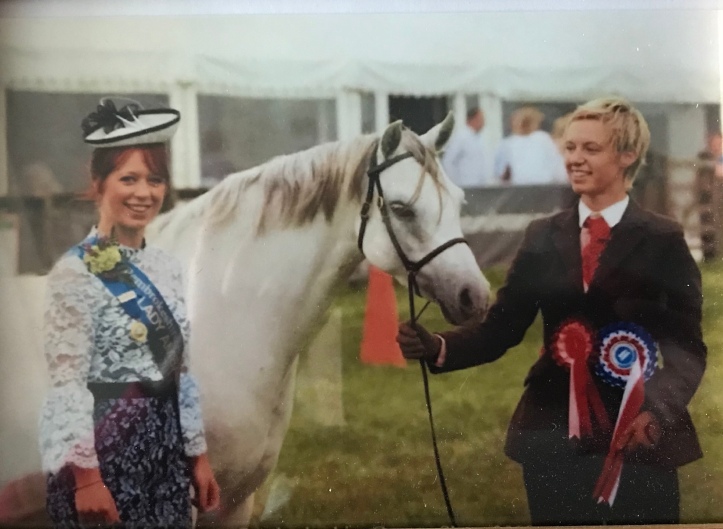 Celebrating yet another Saturday night at home the garden with a Tom Collins for two courtesy of @whiteharedistillery Still, it’s not a bad spot all things considered!
#mondaymotivation 💪 This was in my memories this morning and I think it was just what I needed to get my butt into gear and get some ponies ready to show. They’re about to have a hell of a shock! 🥴 #showpony #showtime #showseason #welshcob #welshsectiond #welshcobsofinstagram #horsegirl #horseygirl #equestrianlife #countrylife #discoverunder5k
This is Fieldcote Halo Henry. He had an absolute freak accident last week which left him with a broken jaw, some very wonky teeth and quite a headache! Luckily, Amelia from Abbey Equine Clinic came to the rescue and whisked him off to hospital where they wired his mouth back in place. His face is still a bit swollen and he’s not out of the woods as it could all get a nasty infection, but I think it’s fair to say he’s feeling much, much better! 🥰 So grateful to him for being a superstar patient and also to Abbey Equine who have been fantastic in their care and attention to him. 👏🏻#ponyofinstagram #welshmountainpony #welshsectiona #toughasnails #countrylife #countryliving #horseygirl #horsegirl #equestrianlife
Easter: less out out with friends, more outside out with these two. 🤷‍♀️🙈#easter #easterlockdown #sunsout #springsunshine #springtime #outdoorlife #countryliving #countrylife #countrylifebestlife #countrylifestyle
That’s three more classrooms that have had the absolute and undisputed pleasure of meeting Mighty Mouse, and the more dubious pleasure of meeting Maggie Simons and I! @leaf_education #farmlife #farmingeducation #farmeducation #farminglife #britishfarming #wearebritishfarming #firstmilk #countrylife #countryliving #welshfarmingfamily #welshfarming
Halfway through the week and so now we’re rollin’ on down to the weekend. Old photo of my favourite gingers but think it captures #humpdayvibes pretty perfectly! #humpday #horsegirl #horseygirl #horsey #countrylife #countrylifestyle #happiness
Chanel continues to push the boundaries of her catabilities. 💐
Is it blowing a gale where you are? The weather is horrific here, so I have sought out some photos from when we moved in last summer to remind myself that there are times when living on the side of a great big hill is wonderful! #countrylife #countryscene #sunsetinthecountry #sunset #cloudscape #skyporn
Sometimes my featured photos couldn’t get it more right. This beaut is of li’l sis @maggie_simons winning and standing champion with Yrallt Mayday Surprise (Jimmy) at the @royal_welsh_show in 2010, their first season together. This was probably their first ‘big’ win. Jimmy was born a stone’s throw from the showground and was sold on as a foal. He made his comeback to Builth an impactful one. 🖤#throwback #royalwelsh #welshponyandcobsociety #welshponyofcobtype #welshsectionc #winnerwinnerchickendinner #champion #thebest #rurallife #countrylife #horseygirl #horsey
Chapter 35 started out bright. Apparently, it’s much the same way as opening chapter. #blueskies #blueskiesandsunshine #springiscoming #springtime #lovespring #countrygirl #countrylife #countryliving
Dydd Gwyl Dewi Hapus bawb!
Back when my greatest concerns were getting out of the calf shed and back to the flat in Notting Hill on time to meet these two, and not get nail varnish on my clothes while painting my toes on the tube. #adifferentworld #countrylifestyle #countrylifeproblems #countrygirlatheart #welsh