Another blunder: I forgot to turn up

I’ve been neglectful. It’s probably the most frequently used and abused excuse ever, but I really have been busy. And busy means no time to actually sit back and reflect. I’ve been so desperate to do so that, due to drive home to Pembrokeshire tonight, I contemplated shunning my car in favour of the train in order to sit and enjoy four hours of virtually uninterrupted offloading. Now, bearing in mind the relationship I have had with public transport in London, I hope this will give you some insight into quite how much I have craved an outlet. Quite.

In the main, these past weeks have been dominated by horse ‘stuff’.

It seems like a distant memory now, but Prince, Milo, myself and Charlotte made another appearance at BSPS Area 16 in Ipswich. I cannot tell you how nerve wracking I find the whole process of my absolute pride and joy entering the competition arena – the ring – in the hands of another rider. Then again, the crippling nerves I had begun to suffer with when showing Prince is exactly why I decided to allow someone else to share him with me in the first place. It’s not that I don’t love Prince, quite the contrary, I adore him. However, I will always remember being told that ‘if Prince gets it wrong, it’s not because he has been naughty or made a mistake, but because I have not told him what to do’ with sufficient clarity. In other words, if it goes tits up, it’s my fault, not his, and there’s only so many days of the year I can tolerate the knotting stomach and beaten rib cage. When you have enjoyed so much success with a horse like him, you don’t want to let him down, and in come the nerves.

Anyway, I was absolutely thrilled to see them win both their classes and gaining two qualifications to the Royal International Horse Show in doing so. I only entered them into the ‘Open’ class because, at fourteen and sitting on him for only the third time ever, I felt it would give Charlotte some practice for the ‘Young Riders Intermediate’ class, so was ecstatic when she won it. I had warned her not to be too disappointed if she wasn’t in the top few but I needn’t have. My heart felt as if it might burst when Prince was called forward as the winner. I wonder how parents can bear the suspense. It is quite testing enough when your vested interest lies in the horse, let alone what it must be when watching your own child.

When the voice behind the loud speaker announced that they had decided to delay starting the Young Riders classes until after 3pm I thought that I might:

A) Lose a hand to frostbite

B) Lose my boyfriend to boredom

C) Lose my boyfriend due to horse induced boredom

D) Lose the will to live

In fairness, I should never have let said boyfriend come with me. It was kind of him to offer but I should have politely declined and kept the good will for another day. Because now any enthusiasm he ever had towards showing is in tatters. Tatters. You know that it will be a bad day when it’s not warm enough to forego your coat and hat and therefore not warm enough for your un-horsey boyfriend to leave the comforts of the truck’s cab. You know that the day really is going pretty terribly when you fail to tell him you’re about to compete, he misses your efforts and spends the day with his laptop. His work laptop. Thank the horsey Gods that Prince and Charlotte won their Young Riders class too, making the wait worthwhile.

Boredom aside, driving home I couldn’t help but think that the day had gone pretty successfully; not only had Prince been his usual star, but Milo had also bagged himself a novice championship with me on board. I was delighted. If you’ve ever read my post deliberating his relationship with his testicles, you will know that our journey has not been a smooth one, so I try not to take for granted these small steps to great things. Nevertheless, he really does seem to be coming into his own, and he no longer feels fraught with nervous energy. 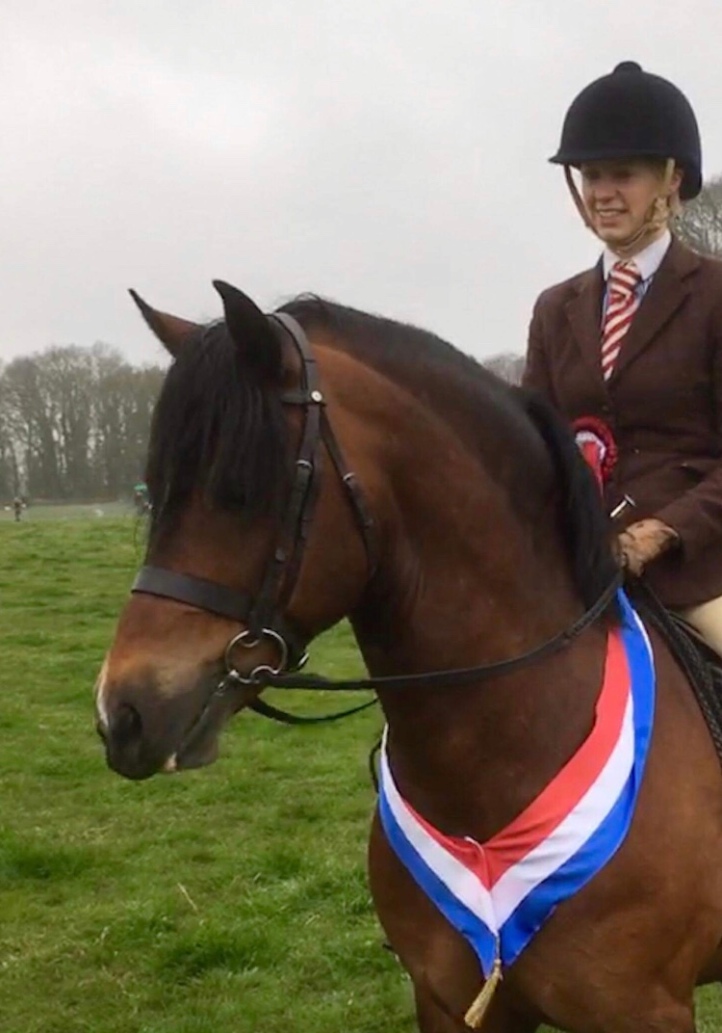 He further impressed me a few days later when he won an open class and gained his Olympia Semi-final qualification. I remain of the opinion that I would do well to wait another year before entering into HOYS qualifiers, as I am increasingly convinced that he finds situations where he feels confined difficult to manage, so why not allow him the time to grow some more confidence rather than frighten him for good? It was another very wet and cold day and so I was glad to be driving away with two wins – Prince also won and took reserve champion – and two qualifications to warm my heart because there was no way my toes were going to thaw for hours.

I took only Betty, my cavapoo, to this show. It was just as well. Prince can be a tad particular about drinking water when offered on the truck, so I tend to leave him untied with his bucket and allow him to take a drink in his own time. Anyway, he decided to use his state of relative freedom to take up rubbing a little patch of his neck on the bar in front of him. He rubbed rhythmically, thus creating a gentle knocking sound and causing the truck to rock back and forth, also rhythmically. I’m sure you will now understand why I say it was just as well that the aforementioned boyfriend was absent, because such a combination of knocking and rocking could easily be mistaken.

Anyway, happy with my spoils for the week, I turned my attention to the large area of decking to the rear of our house. It’s been on the radar for a while. Not only has it been deemed an absolute necessity to smarten it up on account of our dear home being quite the ‘poor relation’ to the other fanciful displays of colour in gardens around us, but also because I hoped that cheering it up may go a minuscule step to making it feel more like the countryside I miss so badly.

This is how we found ourselves on a tiny strip of Battersea called, ingeniously, The Battersea Flower Station. We were freezing cold in a driving wind, but I think that this little flower station is one of those places that, if you’re so inclined to fall in love with forgotten strips of residential London reinvigorated by a wash of green and brilliant flashes of colour and a smattering of cheery bunting, then you will be charmed whatever the weather. A Yorkshire-man called John was encouraging and assured us that as long as we watered our new green friends, all would be well.

Though I took my car, our decision to ‘create atmosphere’ – John’s words, not mine – using some rather massive palm trees and some other puffy bushes resembling giant green golf balls on an oversized terracotta tee meant its boot remained empty. Even trying to fit them in would have meant creeping back to Notting Hill looking like a modern production of that scene in Macbeth when the English creep up to Dunsinane camouflaged in some sawed-off branches. Don’t pretend you don’t know the one. So it fell to Moses to deliver them.

It was whilst waiting for Moses the following morning, bowl of porridge and mug of tea before me that Rhys and I decided we would tackle Wimbledon Common and Richmond Park pre delivery as our weekly London activity. Incidentally, it was much more enjoyable than the boat race, in which I felt as enraptured as the ducks bobbing on the other side of the river. It was a shame, but it seems my favourite kind of boat race remains an entirely different sort of affair. Anyway, just minutes later, Jo Burchell rang me. ‘Are you still ok for this show? Are you on your way?’ Milo, it seems, was in Essex, bathed and readily awaiting an owner and jockey. Oops.

In my defense, we never confirmed that he would go, and so a case of monumental miscommunication lead to this point, not my complete and utter absent mindedness, although it did contribute to a conclusion I drew just yesterday that I was actually losing my mind and memory. I’m not joking, but more on that later, because I feel an episode whereby I rang my Mother to tell her this only for her to weep with laughter is worth sharing in its entirety. Still, another for the blunder catalogue, though thankfully, I have remembered to water those plants…