Luck for Lolly and less luck for Prince

A trip to Northleach on the last weekend in June broke our spell. Northleach is held on Cirencester Park, one of my favourite show-grounds. It’s leafy parkland and quintessentially Cotswold stone buildings provide a beautiful background. This year’s show was a blistering 33 degrees, which I fear had something of a negative effect on some of the day’s breeding classes as many chose to leave mares, foals and other youngstock at home rather than rising traveling them in the baking heat. Still, the ridden Horse of the Year show qualifying classes had good numbers forwards.

Given the string of tiny but galling mishaps that had beset the first half of our season, I can’t say that I was looking forward to Northleach. Certainly I wasn’t when our young but beautiful mare, Haighmoor Gemma would have to be left at home despite being all bathed and ready to go, as a move at a crucial moment in shoeing lead to an unusual injury. Typical.

But all was well when Longhalves Lollapaloosa aka Lolly, pulled off a beautiful performance to win her class and stand champion, earning herself a first ‘golden ticket’ to HOYS. I cried. Even Maggie cried. This was such a rare sight that even Maggie herself was surprised by it, and the sudden rush of emotion that preceded it. To those of you out there who don’t know us, don’t know Lolly and don’t follow showing, Lolly won the ‘Tag la Liga’ award last season for the most consistent pony in HOYS qualifying classes. Great as this was, an actual golden ticket eluded her, and a string of seconds left her the bridesmaid, and unable to go to the October final. So this early qualification really did mean the world to Maggie and I, especially as Lolly is a little mare who has worked her way right into our hearts. She has character in abundance, is sassy, bold and game for any adventure, and yet is kind and gentle to handle. She also tries her hardest, so if there’s a mare that deserves a place at the final, it’s her. And there’s the small matter of her ownership: she isn’t ours and we know that we have only a few years to enjoy with her before she returns home to her breeder and to maternal duties. Driving home, we felt a weight had been lifted. Of course, the turn of the month didn’t come without its challenges. A long trip to the Great Yorkshire Show with our friend Charlotte in tow provided lots of fun, a chance to catch up with friends, and a lovely opportunity to watch some of the strongest showing classes in the country. On that note, if you haven’t been to the GYS, you really should give it a go – it’s well worth your time. I had decided that a trip to Harrogate would be one of two qualifying attempts for Prince. So you can imagine my dissmay when I discovered on the morning of competition that he had developped a reaction to something, presumably in the straw. It was essentially just a rash, and not so bad that it prevented competition. Some TLC and a cold hose and he was A.O.K to give it a go. I further hindered his chances by packing the wrong saddle. His saddle and Paps’ saddle look very similar from behind, but horribly different from the side. Thankfully, Lolly’s saddle was free and fitted sufficiently well that he wasn’t too held back by another of my classical absent-minded blunders. In fact, we ended up third of 37 cobs, but I came home wondering ‘what if he had been fine? Could we have repeated last year’s success?’

I decided that he should also be withdrawn from competition the following week at the Royal Welsh and at the Royal International Horse Show in order to properly clear his system without intervention from dugs and without further stress to his body. Friends told me to ‘get on with it’ as he ‘looked fine’. True, perhaps he did, but I knew that he wasn’t himself. He is 15 now, and I think that little niggles such as this would have taken 48 hours to ‘get over’ two years ago, instead of the week or so required now. Maybe I’m being precious about him, but for that I make no appology. Disappointing as that was for me – I would have loved to have shown him at the Welsh breeds’ premier event – he comes first. And besides we had three others ready to roll, and were still basking in warmth of Lolly’s earlier success. 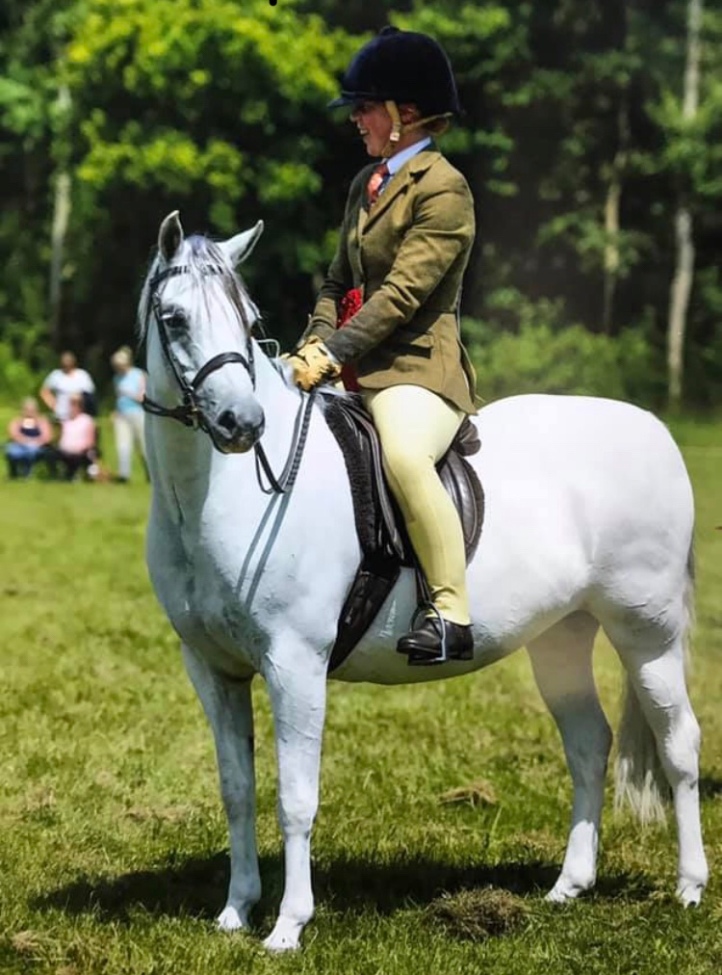