More blundering on my part.

I arrived back in London to brilliant sunshine and felt a spring in my step. I’ve come to the conclusion that if you have to live in London, it’s preferable to do so in the run-up to Christmas and when the sun is out. True, negotiating the shops in December is enough to give even a boulder a mild panic attack but the way the city is lit up more than makes up for it. In summer, the greenery softens the harshness of concrete and stone. There’s birdsong in the mornings and there are abundant flowers. Our little corner of Notting Hill is in full bloom and is particularly pretty at the moment.

We’ve also made an effort to enjoy our decking. I’m relieved that having spent a house deposit on two trees and a few shrubs to accompany the IKEA furniture, it’s genuinely a mini haven and no longer the neighborhood’ s absolute poor relation. No forced fun and stoic smiles are necessary, especially since it’s had another good scrub.

So it was a perfectly blissful few hours that I spent reading on the balcony on Saturday morning. It took me a while to get into David Nicholls’ ‘Us’, but now I’m struggling to tear my eyes away. Little wonder then, that I didn’t feel the prickle of the sun kiss turn into a full on love bite that’s left the skin on my shoulders and back looking like a spicy Dorito and a horizontal line signaling the whereabouts of my socks at the time.

The afternoon was spent perfectly pleasantly: lunch outside Daylesford – their scotch eggs are second only to Mum’s, – a walk along the river in Hammersmith, Betty yapping merrily at anything that remotely resembled a bird. I only panicked once, when she appeared to have her head stuck in some railings, whining at the ducks below. ‘Yes,’ I thought, sipping at my Old Mout lime and kiwi flavour cider at a riverside pub and sharing my mayo-smothered chips with Betty, ‘I can do London life’.

Only the next morning it transpired that actually, flitting as I am between Pembrokeshire and Notting Hill would require more brain power than I originally imagined. As the beauty junkie daughter of another beauty junkie, I promised my mother that I would make a trip on her behalf to restock up her bathroom cupboard. I duly do whenever she asks because in return it means that my N.Dulge club points receive a welcome boost. Win win. And besides, if I was to step outside even once, some serious sunscreen was in order, and I am particularly partial to the Coola pina-colada fragranced variety. Saving the barrier reef with my mineral sunscreen, smelling like a fruity cocktail while I tan has a certain appeal.

Things started to go down hill as we left the store. I’m not entirely sure how it occurred to me that I may have made a significant blunder that sunny morning. Sufficiently significant to significantly dampen the day, in fact. Anyhow, it did, and a frantic search of pockets revealed that I had left the flat key behind. In the flat.

See our flat has two doors, one that takes you from a particularly busy Notting Hill street into the building and into a sort of porch area, and one that lets you into the flat proper. As we were about to leave, I remembered the all-important pooh bags, reopened the second door, sprinted up the stairs, rummaged around in Betty’s box to find said bags, then re-descended the stairs. By this time, Betty and Rhys were waiting for me on the street, so I rushed through, pulling the door behind me and joining them, flustered. I never stopped to take the keys from that inside door.

To say that Rhys was annoyed would be an understatement. He has an unique gait at the best of times, pounding the pavement with purpose. At this point, he was practically stomping, three feet ahead of me, with plumes of smoke almost visibly curling upwards from each ear. I tried calling the estate agents but the answer phone chirpily told me that nobody was there. Helpfully, the emergency contact number was neatly written down in a kitchen drawer. It occurred to me that I had also left the upstairs window wide open and so suggested that we could ask one of the many construction-types working on various shops around us to kindly bring their ladder over, ascend said ladder, enter the flat via the window and let us in. I’d like to say that Rhys was pleased with my suggestion, with my ability to think outside the box and solve the problem swiftly. But I can’t. Instead, my suggestion was far from welcomed. In fact, he was verging on apoplectic. I didn’t think it was the right time to tell him that Betty preferred not to be tugged.

When we reached the flat, a gentle shove revealed that in my hurry, not only had I forgotten the key, I had also neglected to shut the door properly. Had we keys in our pockets, this discovery may have in itself induced similar levels of rage on his parts. As it was, I felt really quite sorry for the poor man, visibly torn as he was between relief, frustration, despair. Whilst a hint of resignation, as if he shouldn’t be surprised, disappointed me a little it wasn’t enough to stop me laughing. So much, in fact that it could have made him combust. Luckily, he too, started to laugh. Through profanities.

That afternoon we decided to escape the city despite only being back in it for 24 hours, and took the train from Victoria to Leatherhead to follow the Mole trail as far as Dorking before taking the train home again.

It was hot. A small section of the river had been used to dump rubbish and the heat had caused the rubbish to stink. Rhys and I endeavored to rush through. Obviously, dogs feel differently about stench, and I heard a loud plop. To her credit, she did try to return to me as soon as I screeched. Only the bank was too steep. The episode could have ended with Rhys dangling over the edge, lifting her by her collar. Instead, the episode concluded with Rhys struggling to his feet and Betty shaking vigorously, her new fragrance, ‘Decay’, spraying all over her rescuer. At which point, he announced that taking care of Betty and I was like dealing with diarrhea and a migraine.

She washed herself off further downstream not at all perturbed by her inability to get out a little bit earlier. She’s becoming increasingly fond of swimming. Especially, I fear, since the incident in a London park where she ran straight into a pond, splashing merrily, and totally oblivious to my screeching. She took note only when a bird hissed loudly a little too close for her comfort. We don’t mention it. It’s too mortifying.

Still, the afternoon ended perfectly pleasantly. It was well worth the trouble to see the Denbies Wine Estate: a vast and rolling vineyard in sleepy Surrey countryside.

At the time, I wondered why he had bought ciders for the train and a bottle of wine to accompany supper. Looking back, perhaps the poor dear needed it.

And now our brief foray back to London is over. Betty and I are somewhere between Cardiff and Carmarthen on a train, struck as ever by the amount of scrap metal on show. And Rhys is back to work. This week it’s Italy first, followed by Paris. Just two days back on UK soil and he’s once again eschewed domestic bliss. There’s not a hint of irony there, I promise. Personally, I can’t understand it. 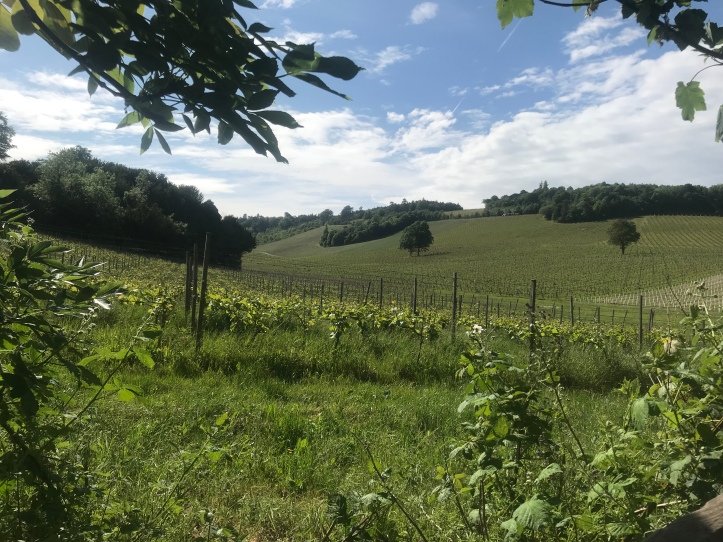 How Betty nailed the BSPS Heritage Championships. Top lorry-dog right there.
I won’t lie, I am looking forwards to stealing this gorgeous guy - Menai George - later at the BSPS Heritage champs. Isn’t it great when your friends have gorgeous ponies and then have to be elsewhere?! 😜 @hannah_t91
Good friends come in all shapes and sizes. I got the lovely Red Rain back into work last week and she is just such a pleasure. And even better, she’s all mine now and she never has to leave 🥰
Bonnie Blue 💙
Today I took this beauty, Keith and Rita’s Brynteg Llwynau Orchid, back to his winter keep with Manda. Maggie and I have had so much fun this year with our first patchy plaited; he’s been an absolute treasure. I’m really hoping that he comes back for more shots at goal next year. Fingers crossed!
Celebrating being three weeks into married life and still smiling with a banging lunch. 👌
And quick as a flash, HOYS was done. Forgot to take photos of Maggie with her very lucky catch ride on Mandy Jackson’s gorgeous boy in the championship last night - good ol’ KMP for letting her have a spin - but I did snap a few of Shane Rogers’ gorgeous Bodynys Kaino, 5th in the Cs. There really is no show like it, and after a PANTS season, it was a marvellous finish and I can’t wait to get some very exciting novices in, backed and on their way for next season, because I am ITCHING to get back to it myself! In the meantime, big well done to everyone: first or last you were winners before setting foot in that arena. And of course, enormous congratulations to everyone who has their dreams come true, savour every moment.
Not sure who was most relieved to find Rhys’ missing Airpod Pro, me or Calzaghe?! He was thinking of dinner; I was thinking of divorce proceedings… Anyone else find their ears are just too small for the pros?! #hackingout #smallears #horseyproblems #horsegirl #horsegirlproblems #welshsectiond #welshcob #poniesofinstagram #equestrianlife #equestriangirl #equestrianlifestyle #countrylife
Did anyone see summer? I guess I blinked and missed it. How is it October already?!
Anyone else feeling like autumn is suddenly upon us? This photo was taken only a few weeks ago but hacking this lad this way yesterday was a VERY different experience. (Think: ☀️🥵🦄➡️💨🌧☔️🐎😈) Why must summer be so fleeting?!
The one photo I have of Day 2 of the wedding celebrations, with Rhys’ family, and taken by my brilliant little(but big) cousin, @geraint10llew Also, incidentally the only photo I have of my in my Sunday dress, which I adored so much I cracked her out again on our mini moon, albeit under a knit and jacket this time.
Just to prove I also did take @rhysmaelgwyn minimooning with me. It wasn’t just me and Betty for real!