We need to talk about my superior levels of clumsiness.

I’ve always been aware that I am absent-minded. Episodes such as burning dry a saucepan full of broth because I became distracted by something trivial are absolutely normal. But of late, I’m afraid that I am surpassing even my own expectations of myself.

In the last fortnight alone, I have washed a roll of brand new poo bags, a set of Rhys’ earphones and my car keys. Thankfully the car keys survived their ordeal, as did the poo bags. The ear phones didn’t fare so well.

I haven’t admitted this to Rhys yet. I wonder sometimes whether he feels that he’s equal parts my minder and my boyfriend anyway. I don’t need to tip the balance, especially as he’s only just recovering from the latest shrinking episode. If only he preferred buying from Primark rather than Paul Smith.

I don’t think any of this would surprise some of my old friends. In fact, I don’t think that they would expect any better. Equally, new friends are beginning to realize what they’re dealing with. Oli, who looks after my ponies along with his wife, Jo, remarked while dropping me off at the train station for the first time, that he felt it was like dropping off a child, and later admitted that as he pointed me towards the door, he wondered whether he should check I actually made it onto the right platform. Last week, as I tripped, stepping absentmindedly onto a tail bandage I had managed to inadvertently wrap around my foot, he concluded that I “was like something out of a film”. He meant a slapstick comedy.

Annoyingly, or perhaps, thankfully, in a professional capacity, I am actually quite switched on. It’s only in the day-to-day, my personal life that I manage to brew up such conundrums for myself. This makes me wonder whether it’s a little like short term and long term memory. My brain is so full of fuzz, of stuff – usually anxiety fueled – that actually it just doesn’t register the minor blunders I commit daily.

Then again, I sometimes wonder whether it’s simply my own conscious keeping me thoroughly grounded. Back to Team Burchell HQ again for a great example in recent weeks. Oli accidentally scratched the new paintwork on my truck. It is a tiny – a teeny-weeny-yellow-spot-esque – scratch. I felt relived that for once, it wasn’t me. Being doubly careful, exercising my advantage, I edged theirs backwards next time I drove her. I crept around the corner, keeping half an eye the whole time of the front corner as it inched past a metal girder. Then I drove straight over a metal bin and scratched the back step. “Don’t be thinking you’re not the most accident prone one around here,” my conscience warned, metaphorically marching me sheepishly back to my place at the front of the clumsy line.

With this knowledge in mind, I have avoided driving around London. I am from Pembrokeshire: you’re more likely to find zebras crossing than zebra crossings in our ‘neck’o’the woods’. It’s frightening enough when driving a horsebox as far in as Olympia, traveling 15mph slower than most and with the advantage of a raised perspective and at least one vigilant co-driver. Getting to Notting Hill is just a short foray further up the same road. It’s manageable. But driving past the Ritz, Trafalgar Square, the Tower of London yesterday was completely accidental and therefore induced extreme anxiety. As I gripped the wheel, the only civilian being in a sea of cabbies, I wished I had a paper bag.

This trauma became the most acutely felt, and I forgot all about my last train journey home. I forgot all about splitting my trousers before half of the carriage, my (facial) cheeks burning with humiliation. I booked a ticket. The first step towards disaster came as I remembered that I had experimented with washing one of my favourite dresses in preparation for next week’s black tie affair, and needed to pull it out, at about the same time as I should have been getting into a cab.

I had change in my pocket, and believing it to be faster than a card transaction, I added 10p pieces to the little tray in front of me as the meter crept upwards. I ran towards the platforms, fumbling with my phone as I went. Now for platform nine. Platform nine…?

I should have trusted my gut. Because it was too simple, too lucky to find platform nine right before me. Still, searching for more indicators and unable to find any, I stepped onto the train. I relaxed. Until a lady’s voice came over the system, welcoming me onto a train to Paynton. Paynton? Where the jackanory is that in relation to Carmarthen? And it dawned on me then. This was the wrong train.

I scooped up the laptop, the diary, the book, the magazine, the dog and the woolly hat, cursing myself for having pulled out so much from my bag and ran. Then I ran along platform; rucksack open, out dropped the ipad, urban decay eye pallet and Grazia magazine. And as I looked up to thank the lady helping me recover my spilt possessions, I saw the only other GWR train due to depart, edge away.

45 minutes later, I am bound for Swansea. I hope. I am sat on a Great Western Railway train, so that’s a good start: I’m headed in the right direction. I’m taking consolation in the fact that by sharing my bumbling attempt at real life, I can laugh, and you may well giggle, too. And in the meantime, I might just as well sit back and enjoy the view: it would be a shame to miss it twice. 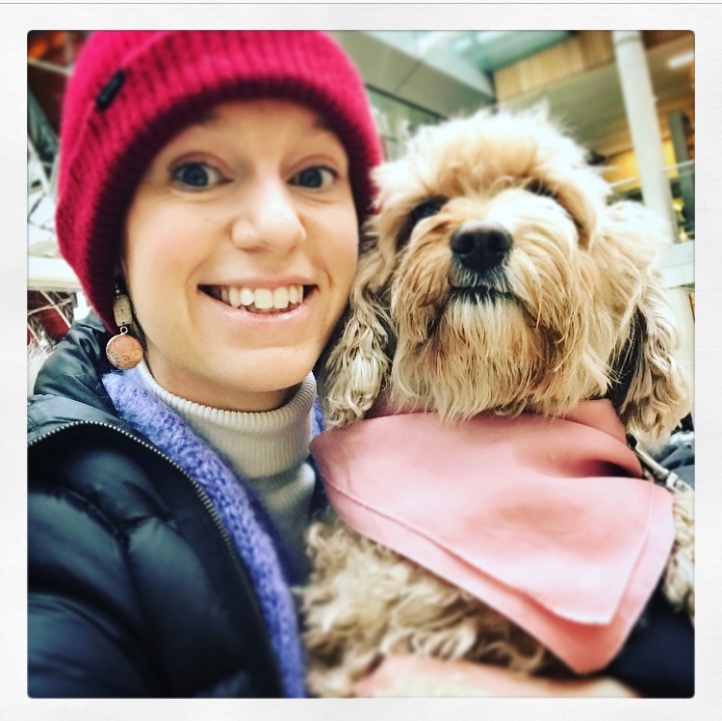